The surf coast stretches from Erris in Co.Mayo to Donegal town passing through Co.Sligo. This strech of coast is famous for it's rugged coast, huge waves and wild landscapes.

Downpatrick Head (Dun Briste):
​
Downpatrick Head used and still is an important pilgrim destination. St Patrick founded a church here, ruins can still be seen within the landscape.
The very spectacular sea-stack is called Dún Briste. Many birds can be seen breeding along the rocks of this stack.
There are also multiple blowholes, the largest one being Poll Na Seantainne which on a stormy day is spectacular. Lissadell is famous as the childhood home of Constance Markievicz, her sister Eva Gore Booth and her brother Josslyn Gore Booth. Constance was one of the leaders of the 1916 Rising, and was the first woman to be elected to Dáil Eireann, where she served as Minister for Labour . Both William butler Yeats and Jack Yeats visited Lissadell House for cricket matches and horse racing; and as a young man the poet made friends with the Gore-Booth sisters Constance and Eva, and often stayed at Lissadell during the years 1893-5 .
The house and gardens are now lovingly restored  and are worth a visit. The route around Mullaghmore Head is spectacular. Wild waves crashing upon the shoreline, seagulls flying in the strong westerly breeze. Mullaghmore Head has become world renowned for it's big wave tow-in surfing, especially during the winter months. Imaginative and creative restaurateurs have placed Sligo on the food map in Ireland and beyond. The Wild Atlantic provides the freshest ingredients as do the many artisan producers.
The recently launched Sligo food trail is there to be tried, tested and sampled. You will be pleasantly suprised by the great selection of restaurants, bars and pubs serving the freshest of food in a relaxing atmosphere ( http://sligofoodtrail.ie ) Carrowmore  is the largest cemetery of megalithic tombs in Ireland. The site is managed by the Office of public works, and a small visitor center is located at the site.
Nowadays, approx. 30 monuments survive although it is thought that approx. 60 existed, but some got lost during the 18th & 19th century due to quarrying and field clearing. Admire the tombs, visit the visitor center or just enjoy the views towards Knocknarea and Benbulben. The Sligo Way is a waymarked long distance walking route which starts at Lough Talt and runs along the ox mountains towards the town of Dromahair.
The route is 78 km in length and takes approx. 3 days to complete.

The going is a mixture of tracks, forests, roadways and boggy mountain trails. There are not many towns or villages along the route, but Coolaney and Collooney are good stopping-off places.

Sligo Bay Oysters are distinguished by their firm texture and rich flavour. They are fresh and tasty. 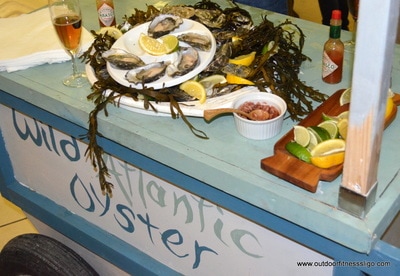 The Warriors Run takes place in Strandhill, co.Sligo. It takes competitors from the Cannon Gun at the beachfront in Strandhill to the top of Knocknarea (1,070ft) , around Queen Maeves Cairn and back to the beachfront again. For the uninitiated, a 15 Kilometre race might seem easy. Not the Warriors Run!  The race is classified as a road and hill race or multi-terrained, so whilst approximately nine of its kilometres are on paved roads, it is the special six kilometres in the middle, to the top of Knocknarea that gives the race its bite. These six kilometres include a 700 foot climb through fields, loose gravel, unsurfaced and heather paths. At its steepest incline on the way up, even the most professional athlete slows to a walk and then brace themselves to face the equally daunting downhill run, back down the often slippery slopes, even in the driest of weather.

Despite the endurance trait of the race, each year around 800 runners take part in this unique event to cross the finish line at the beachfront and earn the honour of being able to say that they completed The Warriors Run.